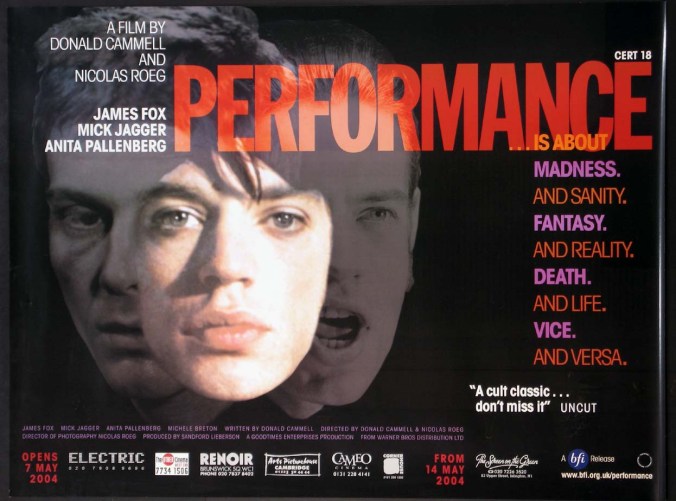 This is both a cult movie and a seminal British film. Chas, (James Fox) is an East End gang member who collects protection money. When his methods result in a killing he goes on the run and hides out in Notting Hill Gate basement, where, upstairs there is a ménage à trois. Chas becomes involved in the hedonistic activities at the house and, in particular with an ex-rock musician Turner (Mick Jagger).

The film became infamous for its melee of explicit violence, sex and drug-taking. The 1970s also became infamous for the clash between adventurous film-making and conservative values, embodied in another British film The Devils (1971) and the campaign against it by an organisation called ‘The Festival of Light’.

This film was produced by Warner Brothers, who also were involved in the equally controversial A Clockwork Orange (1971). The studio executives did not know how to manage the film and enforced cuts in the finished property. The British Board of Film Censorship [as it then was] made more cuts. On release it received an ‘X certificate’ whilst in the USA it received an ‘R’ rating. It received similar certificates in other territories and often additional cuts. The USA release suffered the further indignity of having some cockney dialogue being dubbed [re-voiced]; a fate also experienced by the radically different Kes (1969).

His fellow director was Nicolas Roeg. He was born in London; and also appropriately nearly opposite the old Marylebone Film Studio, used at one point by Hammer Films. He started out as a cinematographer and indeed shot this film. He went onto direct several successful and highly praised films, including Don’t Look Now (1973), screened in a digital version here last week. He had an unconventional style of film photography. One critic, Steve Rose, remarked that his films

“shatter reality into a thousand pieces” .

His film work, as in this title, is always memorable.

The film runs 105 minutes in colour and black and white, and in the European widescreen ratio. This screening presents the restoration by the BFI from 2004 in 35mm.

The background to the film and its handling by the industry and censors will be illuminated in the Q&A that follows with Sanford Lieberson, the producer on the film. His other work includes a number of documentaries including the very fine ‘Brother Can You Spare a Dime (1975). He will be accompanied by Jay Glennie who has produced a book; ‘Performance: 50th Anniversary Book’.