You can see the Academy Award nominated film and be involved with a Question and Answer session with Granville Williams at this special screening. Granville is an experienced writer on the Newspaper and Media Industries and is the Editor of ‘FreePress’ from the Campaign for Press and Broadcasting Freedom.  He writes;

The Post in an honourable addition to Hollywood films (All The Presidents Men (1976), Good Night, and Good Luck (2005), Spotlight (2015)) which portray journalists and journalism in a positive way, as opposed to grubby hacks chasing squalid, sensational headlines .

When I see films like these I wonder why UK film directors haven’t tackled such subjects. Couldn’t the dogged work of Guardian journalist, Nick Davies, as he probed and finally exposed the industrial scale of phone-hacking at Murdoch’s ‘News of the World’, be a suitable subject?

The credits for The Post say it is ‘based on a true story’ and whilst I can quibble with the way the film modifies some of the facts about the way the Washington Post’s publisher, Katharine Graham, finally came to back publication of the Pentagon Papers, I think the film captures perfectly how enmeshed she was in the Washington elite and the political and commercial pressures on her to take an easier route, and not publish the papers.

I will talk more about this in the Q&A session following the 5.00pm showing of the film on Sunday 28 January at the Hyde Park Picture House. Here I just want to develop a couple of points about two aspects of the film.

One is the way that Spielberg focuses on the old hot metal printing press scenes and the workings of the Linotype machines assembling the lines of type for the stories. It’s very evocative.

In 1975 after Watergate there was a ferocious strike by printers which set her and the newspaper on a conservative course. Graham devoted dozens of pages in her autobiography ‘Personal History’ to vilifying Post press operators who went on strike in 1975. She stressed the damage done to printing equipment as the walkout began and “the unforgivable acts of violence throughout the strike.”

John Hanrahan, a Newspaper Guild member at the Post, wouldn’t cross the picket lines and never went back. He pointed out,

“The Washington Post under Katharine Graham pioneered the union-busting ‘replacement worker’ strategy that Ronald Reagan subsequently used against the air-traffic controllers and that corporate America — in the Caterpillar, Bridgestone/Firestone and other strikes — used to throw thousands of workers out of their jobs in the 1980s and the ’90s.”

The other point is on the role of Ben Bagdikian in the film – he’s the journalist who gets access to Daniel Ellsberg and persuades him to hand over 4000 pages for the Post to use. He was national editor on the Post, a man who the editor, Ben Bradlee, in his autobiography, ‘A Good Life’, describes as ‘thorny’. Bagdikian had a big influence on me, and others interested in media reform. He wrote a key book ‘The Media Monopoly’  (1983) which warned about the chilling effects of corporate ownership and mass advertising on US media. Fifty corporations owned most of the US media when he wrote the first edition. By the time he wrote ‘The New Media Monopoly’ (2004) it had dwindled to five.

NB A couple of friends who have already seen the film thought it helps if one is clear about ‘The Pentagon Papers’. You can check this out on Wikipedia.

Bill Walton takes a look at In The Mood For Love ahead of Saturday’s 35mm screening and panel discussion on the Chinese film industry.

“He remembers those vanished years. As though looking through a dusty window pane, the past is something he could see, but not touch. And everything he sees is blurred and indistinct.”

The magic of cinema offers many tantalising glimpses into other cultures, other times, other ways of seeing. Whether it’s transgender sex workers in California (Tangerine, 2015), censorship in Iran (Taxi Tehran, 2015), the self-justification by Indonesian death squads (The Act of Killing, 2012), corrupt officials in Russia (Leviathan, 2013), or life on a council estate in Bradford, Yorkshire (The Selfish Giant, 2013) … we can always gain from such different ways of seeing the world.

In the Mood for Love brings to life Hong Kong in the ‘60s. While there is a powerful code of propriety it cannot completely crush the intense desires for intimacy between a man and women whose marriages are not going well. The film subtly explores loneliness and hope, love and betrayal. The cultural context is integral to the story. I found that Wong Kar-wai’s attempts to tackle such themes in the United States (My Blueberry Nights, 2007) did not work nearly as well.

Chow Mo-wan (Tony Leung): “Feelings can creep up just like that. I thought I was in control.”

Everything about this film is beautiful, from the acting, the photography (Christopher Doyle), and the haunting music, to the design of the credits. No wonder it was recently voted by critics to be one of the greatest films of the 21st Century. This screening has been arranged with the Business Confucius Institute and will be preceded by a panel discussion examining the state of contemporary Chinese cinema.

There have been countless essays written about cinematic representations of the Holocaust; are the Academy Award winning depictions by Steven Spielberg or Roberto Benigni truly important? or just trite exploitation? Is it ever OK to make a fiction film about the awful events that happened in places like Auschwitz-Birkenau and Treblinka?

Son of Saul director, Laszlo Nemes, himself a film school graduate, has made a film that places him into this ongoing conversation, and sees his debut as, among other things, a critique of established popular representations. In an interview with The New York Times, Nemes reveals his antithetical approach “Since the end of the Second World War I’ve seen very clearly that many people more or less consider the Holocaust as a mythical story and approached it probably from a defensive mechanism, as a way to get away from it through survival stories. I don’t think Auschwitz and the extermination of the European Jews was about survival. It was about death. And how Europe killed itself, committed suicide.”

But Son of Saul, now an Oscar winner itself (Best Foreign Language Film 88th Academy Awards) has been met with its own share of criticism. Manohla Dargis for The New York Times called the film “Intellectually repellent”, Michael Koresky in Reverse Shot described it as being “grotesque and exploitative” and Stefan Grissemann in Film Comment similarly sees it as exploitation; writing “In its pursuit of controversy, Son of Saul plumbs unforeseeably new depths of revulsion.”

The film does, however, have a surprising but powerful supporter in Claude Lanzmann, director of the revered holocaust documentary, Shoah (1985). Lanzmann has criticised other films for dramatising the horrors of death camps, yet has given Son of Saul his approval, praising it as an “anti-Schindler’s List”

Son of Saul first played at Hyde Park Picture House as part of the Leeds International Film Festival last November, where it didn’t quite manage to rank in the audience top 10. Yet looking at Twitter, it definitely had its fair share of supporters in the audiences, and although I’m undecided on how I feel about the suspense plotline, I have to recommend it for Géza Röhrig’s central performance, the impressive stark sound design and for the arresting shallow focus cinematography by Mátyás Erdély. 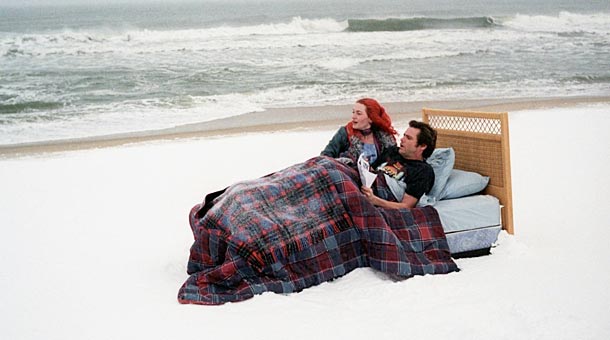 The second session of the Philosophy and Film series at the Hyde Park Picture House will show Eternal Sunshine of the Spotless Mind (2004), directed by Michel Gondry, with a screenplay by Charlie Kaufman.  Eternal Sunshine is about an unhappy estranged couple, Clementine (Kate Winslet) and Joel (Jim Carrey), who separately decide to have their tormented memories of their failed affair deleted by a professional service, Lacuna Inc. Then they accidentally meet again, not knowing who they are.

Here’s one idea. We’ve all had bad experiences, and bad memories of those experiences. They can make us feel defeated, depressed, even paralyzed. Wouldn’t we be better off without them? Here’s another idea. Our memories naturally decay. By and large, we don’t think this is a tragedy. It protects us against being entombed in the past, and leaves us free to live in the present, and to plan for the future. But if this forgetting doesn’t ruin us, and may even benefit us, then why would it be a bad idea, if we could, to take deliberate steps to erase these memories? And, if it turns out that it would be a bad idea to deliberately erase our memories, then should we try to fight against the natural processes of decay? The film obliquely explores ideas like these in a variety of ways, and from a variety of angles. Dr. Gerald Lang (University of Leeds) will be talking about them after the screening of the film.

Terrence Malick’s directorial film follows two young lovers on a road trip across South Dakota, as they kill people along the way. It is a beautiful film, and touches upon many things that will occupy Malick throughout his career – nature, wonder, innocence, love and morality.

Dr. Joe Saunders (University of Leeds) will provide a short talk after the film, exploring Malick’s treatment of love and morality. This will be followed by a discussion with the audience.

This is the inaugural session of a philosophy and film series at the Hyde Park Picture House. The series explores philosophical issues raised by some of cinema’s most engaging films.