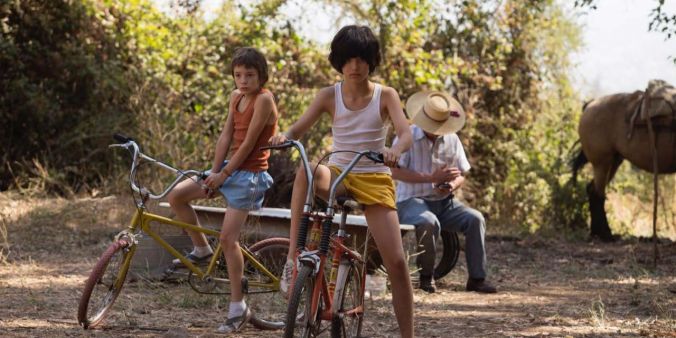 The second feature film from Chilean director Dominga Sotomayor Castillo, it was released with great acclaim at Switzerland’s Locarno Film Festival in August 2018 where Sotomayor Castillo was recognised as the  first female winner of the festival’s Best Direction Award.

It’s December 1989, the Pinochet government has recently fallen and Chile is holding its breath through a tinder-box summer. Sofía (Demian Hernández) is a teenager working out her place in her close-knit and newly-established agricultural community that is finding its feet on the cusp of the new year. The heat of the summer and the boil of teenage frustration is tangible as Sofía, her siblings and the adults who surround them attempt to settle into their new lives and prepare for the village’s new year celebrations. We see the families building their homes, raising their animals and testing the political dynamics of their new settlement while their children explore the forest (which holds a spectacular tree house), and their relationships with each other. Village life is largely unhurried and inward-looking and it becomes clear that the adults have as little clue as the teenagers when it comes to making new lives in the countryside. The events following the party force the community to confront their place in nature and face the reality of summer in the wilderness.

In casting, Sotomayor Castillo included a handful of professional actors but sourced the larger part of the cast – including Sofía and all of the children’s roles – from the community where the film was shot. Portions of the dialogue are improvised, giving an authentic tone to the domestic scenes.

Like the Italian summer in Call Me By Your Name (2017), Too Late to Die Young has a definite date but there’s a hazy, languid quality to the piece that means it could be placed in any year of a decade. The director herself has pointed out in interviews that the soundtrack features music audible to the characters that wasn’t released until years after the film is set. The themes of finding one’s place in the world, the unsettling changes of teenager-hood and the contrast of local politics with national turmoil have played out over and again in film, but Too Late To Die Young explores these organically and sensitively, keeping a distance between the viewer and the characters that means we don’t learn their every thought.

This film has to be seen at the cinema for the enormity of the landscape alone. You might think you’ve had enough of the hot weather after the last week, but there’s a certain magic to flooding your senses with a summer viewed from the cool, dark safety of the picture house that you won’t want to miss.