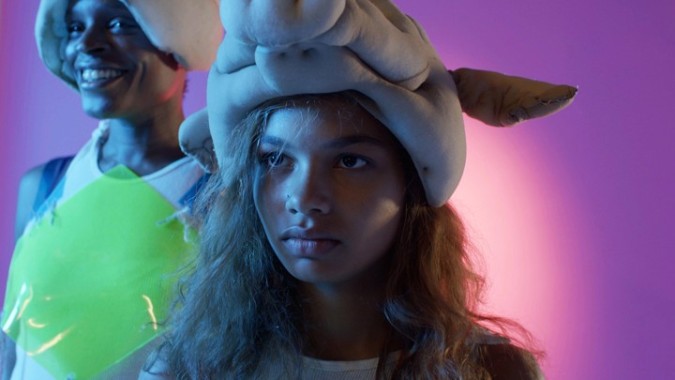 “What you are experiencing is just a metaphor”

Madeline’s Madeline is the third feature film from experimental filmmaker Josephine Decker, which follows teen actress Madeline (Helena Howard) as she attempts to bring to life the artistic vision of immersive theatre director Evangeline (Molly Parker) and negotiate her fraught relationship with her mother Regina (Miranda July) along the way.

Lovers of Terrence Malick’s unique brand of film-philosophy are likely to find a second home in Decker’s artistic approach to themes of mental health, race and the conflation of life with art. The above quote, spoken by an unidentified nurse bathed in a halo of light, feels like an appropriate opening to a film which continually challenges its audience to decipher a complex web of perspectives, dream sequences and relationships presented in frenetic and, at times, frustrating ways.

Madeline is a biracial teenager whom we learn is recovering from a psychotic episode which prompted a stay in a psychiatric ward, perhaps the reason for the dreamlike opening to the film – a POV shot of a nurse looking down and seemingly speaking to a patient whilst bathed in a halo of light. Her interactions with people her own age are sparse, and her mother (Regina) alludes to her being bullied at school.

Regina is a nervous, seemingly introverted woman with a propensity to dissolve into emotional outbursts. She has clear difficulty in connecting with and deciphering the behaviour of her daughter, often interpreting Madeline’s exuberant behaviour through the lens of her mental illness.

As a result, Madeline is drawn to the confidence of theatre group director Evangeline, who not only praises and encourages her artistic tendencies but also wades into morally murky territory; after Madeline admits to a having a dream in which she harms her mother, Evangeline reveals she dreamt Madeline was her daughter.

As the narrative develops, Evangeline places Madeline at the centre of the theatre groups project, weaving her problematic relationship with her mother into the performance, seemingly oblivious to the insensitivity of a wealthy white woman using a biracial teenager with mental health issues as the base for her own artistic aspirations.

The above might sound like a relatively middle-of-the-road drama, but it brings its subjects to life through incredibly distinct formal treatment. Characters are captured with a roaming handheld camera, which ducks and dives around sets, tilting on its axis and occasionally getting distracted and panning up to focus on the branch of a tree or swirling clouds in the sky above.

Shots open in deep focus before shifting to shallow focus, denying the audience an omniscient viewing experience whilst also feeling deeply present in the character’s interactions. This happens in reverse too, where shots open open in an unfocused state and gradually shift back to clarity. Extreme close-ups of mouths, hands, eyes and sometimes the backs of heads break bodies up into their constituent parts.

These stylistic choices occasionally feel infuriating, but in their totality they hang together with a certain beauty. Are we experiencing the world through the mind of Madeline? The perspective is never truly clear, and Decker seems at pains to offer no judgements on the behaviours of her characters who are all, at times, manipulative, angry, loving and deeply in tune with one another. Perhaps the fractured formal quality of this film seeks to do away with the tropes of ‘good’ and ‘bad’ people in film making and to simply present life as it often is – chaotic.

“In all chaos there is a cosmos, in all disorder a secret order, that the pendulum of the mind swings between sense and nonsense, not between right and wrong.”