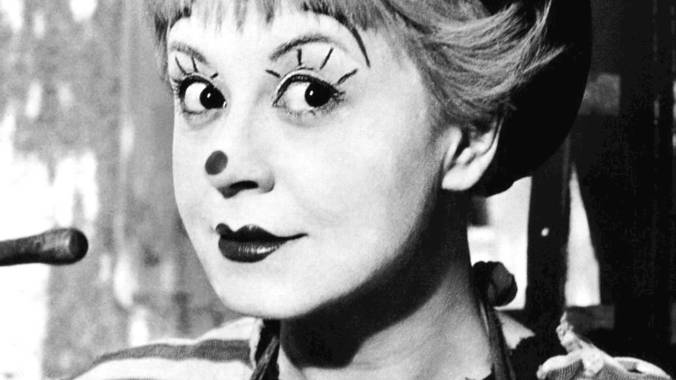 The circus is here. “Zampanò e arrivato!”
La Strada (The Road) is a rich mix of love and loneliness, tenderness and violence, humour and sadness. Director Federico Fellini sets this story in Italy soon after World War Two. As in his other films, great photography makes full use of circus, parades, the sea, the weather, and bleak early morning light. La Strada was filmed on location, with local people and settings adding to the atmosphere.
What characters!
Giulietta Masina’s portrayal of Gelsomina (an impoverished, innocent simpleton, described in the film by her mother as ‘a bit strange’) is brilliant. In fact so brilliant that when she attended a showing of La Strada at the Italian Cinema Festival in London, viewers thought that Fellini had really rescued her from a circus. Out of sympathy they sent scarves, socks, sweaters and shawls to the hotel where she was staying. In reality, at that time, she had had been married to Fellini for over ten years. Charlie Chaplin said that he saw Giulietta as his spiritual daughter.
Actor and former prize-fighter Anthony Quinn gives an inspired performance as Zampanò, a brutish circus performer.  He excels as the volatile and dim-witted outcast, racked with jealousy.
Richard Basehart is very engaging as the exuberant, fun-loving Fool, a high-wire performer and clown. And the Fool can’t resist flirting with Gelsomina …
La Strada has had a huge influence on film making.  And apparently it was also the inspiration for  both Bob Dylan’s ‘Mr. Tambourine Man’ and Kris Kristofferson’s ‘Me and Bobby McGee’.
This story of human frailties and personal rivalries should not be missed!
“It is only when I am doing my work that I feel truly alive”
Federico Fellini