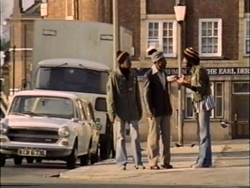 This was a drama in the BBC’s ‘Play for Today’ series. The series followed on from the pioneer ‘Wednesday Play’ series and ran from 1970 to 1984. There were some 300 hundred entries by notable dramatists, film-makers and craft people often commenting on their contemporary world. Fifty years on from the launch of the series BBC Four  is offering a celebration. ‘Drama out of a Crisis’ offered an overview of the series last week and is still available on catch-up. Now we can look forward to screening of some of the highlight dramas, though which and how many is as yet unknown.

This drama from 1979 was written by Horace Ové and Jim Hawkins and directed by Ové. It presents the events in which three Africa-Caribbean men attempted a robbery at the Spaghetti House Restaurant in Knightsbridge and held the staff and customers hostage for six days whilst the police lay siege. This was a dramatisation of actual events in 1975.

The director Horace Ové was one of the really talented and interesting film-makers in Britain over the last sixty odd years. However, he is seriously under-represented in the film canon. He was only able to produce two features in that period though these are seminal films; Pressure (1976) and Playing Away (1987). His career started with three short documentaries, including Baldwin’s Nigger (1968). He did an amount of work for television including two for ‘Play for Today’: episodes in the popular series Empire Road (1979): and a drama mini-series The Orchid House (1991). He also worked in photography and in the theatre.

His film work, including A Hole in Babylon, still speaks to the contemporary world of Britain: especially in a period when ‘Black Lives Matter’ has achieved such influence. The drama presumably will be on the I-Player well into 2021. The overview ‘Drama out of a Crisis’ is already on the iPlayer. It is a little selective in its coverage but a full listing of the ‘Play for Today’ series is on Wikipedia.