Daily from Friday till Monday and again on next Thursday 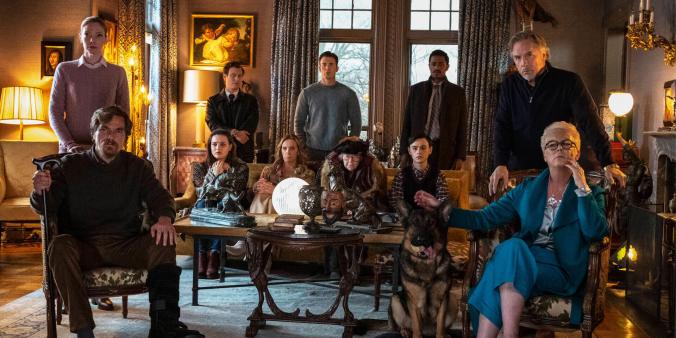 The drama opens with two German shepherds running across a darkened lawn outside an old and large mansion  in the early hours. The two dogs are not developed as characters but they turn out to be important clues in the solving the question posed in the story. This is a self-conscious exploration and exploitation of the classic  country-house murder mystery. It is a very entertaining presentation of the genre, at times with the air of pastiche. It offers frequent references to both cinematic and literary precedents, especially that of the Agatha Christie oeuvre.

A family patriarch (Christopher Plummer) is dead; the question whether is this suicide or murder? And if the latter, who is the killer? The investigation is in the hands of a gentleman detective (Daniel Craig). Possible suspect include all the members of the family who stand  to inherit a fortune; (Toni Collette, Jamie Lee Curtis, Chris Evans, Michael Shannon and Dom Johnson). They are an unprepossessing group of nouveau riches. The key witness, possibly also a suspect, is the nurse and carer (Marta Cabrera).

The plot is labyrinthine and fairly implausible. But the scripting has created this complicated series of events and exposures with real skill. Moreover there are many witty scenes where the excellent cast exploit the changing aspects of the story to the full. The production values are good. And the characters and unfolding plot hold the attention well; though the film is slightly indulgent and slightly over-long. As the title suggests knives matter and the patriarch’s portrait is a recurring prop.

As well as paying homage to a long-running and successful genre the title updates the premises to skewer some of the foibles of the modern USA. One family member  tells the nurse, who is [possibly and variously] identified as coming from Brazil or Paraguay or Uruguay, that

‘You’re not even an American!’

If this is not a quote from Donald Trump it sounds like one.