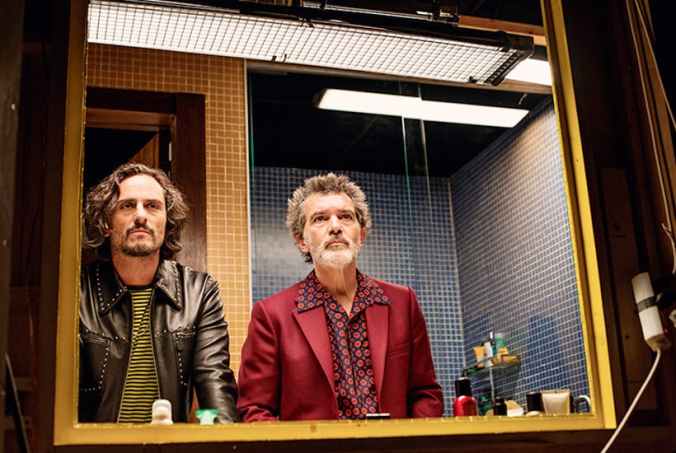 Pedro Almodóvar is a man of many stories. I find his vivid blend of heroism, tragedy and flashes of utter absurdity a heady combination. His films have spanned grand themes and domestic oddities, drugged gazpacho and heroin dealing, tiger owning nuns, but this time the spotlight shines back at the director himself. Or rather, it shines at the idea of ‘the Director’; Antonio Banderas stars as Salvador Mallo, an aging filmmaker whose ill health, the significant anniversary of one of his early movies and an encounter with a former friend cause him to review his life and works. Mallo’s life unfolds for the audience, encompassing a childhood with his mother (played by Penelope Cruz), his early career and first loves, through a series of flashbacks and reflections.

It seems almost unavoidable to consider this film as something of a self portrait; Banderas’ appearance is grizzled with a dandelion clock of hair similar to Almodóvar’s own, he reportedly wore the director’s clothes during filming – parts of which even took place in his own Madrid apartment. We have more than a few hints then that Mallo might be a version of the director himself. Almodóvar has shrugged off comparisons at interview, saying he wouldn’t write or direct an autobiographical work, but it feels unlikely that the similarities are entirely coincidental.

There’s a lot to look forward to here. At Cannes this year, Banderas won the Best Actor award for his portrayal of Mallo and Alberto Iglesias (another frequent Almodóvar collaborator, having worked on Volver (2006) and Julieta (2016) amongst others) won the award for Best Soundtrack. Cruz and Banderas are giants of Spanish cinema who’ve made the leap into Hollywood and both keep one foot squarely in Europe. While the pair feature in different timelines in this film, it’ll be a treat to see them on screen together – something that hasn’t happened since their brief cameos in 2013’s Los Amantes Pasajeros (I’m So Excited!). I hope that the actors’ transatlantic popularity can help to bring a wider audience than existing fans to the intense visual feast of an Almodóvar picture. If you’ve not seen any of his work to date, hunt out Volver (2006) featuring Penelope Cruz returning from the dead, try Women on the Edge of a Nervous Breakdown (1989), a dark domestic comedy with Carmen Maura and The Skin I Live In (2011) where Banderas is a sinister Dr Frankenstein-esque character haunted by his past.

On top of the Cannes gongs, there are rumours of other nominations for Pain and Glory, with reviewers describing Banderas’ performance as ‘career defining’ and the role he was ‘born to play’. I’m convinced and can’t wait to see it.

Pain and Glory will be showing at the Picture House from Friday.