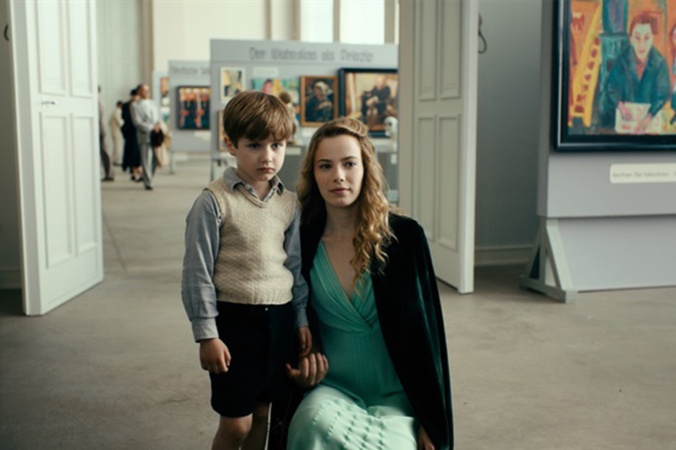 This new title had two screenings at the Picture House. I managed the second which had a small but respectable audience.  They all stayed to the end, which was 188 minutes later. In fact the film did not seem three hours to me as the characters and the stories were absorbing.

I write ‘stories’ as there are two narrative strands in the film and I thought one weakness was that they never seemed to completely mesh. The English language title refers to the personal and family drama strand. This starts in 1937 as we see the young Kurt [Cai Cohrs) with his Aunt Elizabeth (Saskia Rosendahl) as they follow a guided tour of the Nazi exhibition of ‘degenerate art’. Kurt already has ambitions to be  a painter. But the emphasis is on the personal. Elizabeth admonishes the young Kurt to

‘never look away’ because ‘everything that is true holds beauty in it’.

But she is soon lost and becomes a victim of the Nazi policies of sterilization and extermination of people deemed physically and mentally ‘unfit’.

After the war Kurt and his family find themselves in the zone liberated by the Soviet armies and then the German Democratic Republic. Kurt goes to art school where the official style is ‘Socialist realism’. He meets and falls in love with another student Elizabeth, ‘Ellie’ (Paula Beer). Her father Carl (Sebastian Koch) is a gynecologist and the audience [but not Kurt or Ellie] know that he has a suspect past from the era of the Third Reich. As this starts to catch up with him he leaves for the West. Now married Kurt and Ellie follow just before the erection of the infamous ‘Wall’.

This latter part of the film is closer to the German title, which translates as ‘Without an Author’. This refers to the film using some of the life story of an actual German artist, Gerhard Richter, whose paintings figure in the film. Kurt enrolls at the Düsseldorf Art Academy, at the time a centre of avant-garde art. Here we see another thinly veiled character from real life, the artist  Joseph Beuys. Now Kurt finds an artistic voice  and critical acclaim.

Adult Kurt with a Socialist Realist portrait and an experimental canvas

Less focused is family life, but Kurt and Ellie have children and happiness. The fate of her father Carl is not revealed but there is a hint that nemesis is closing in.

The cast work well, Tom Schilling and Paula Beer are reasonably good.  Sebastian Koch is excellent with a real sense of malevolence. The stand-out performance is Saskia Rosendahl, though she is only seen in the early part of the film.

The production is extremely well done. The design, cinematography and sound all work well to produce a convincing creation of the places and times. And there are both subtle and less subtle references in the style that draw the characters and their experiences together. The music does this at times, but other sequences have a rather obvious accompaniment, sometimes with a Wagnerian tone. I suspect the film-makers were not confident that all the key moments of development totally worked.

This contributes to the sense of a division in the film. And the personal drama, especially the romantic, is rather conventional in presentation. Whereas the artistic is less so. But I think both maintain the interest of the viewer.

The film  is written and directed  by Florian Henckel von Donnersmarck who was responsible for the very fine The Lives of Others  / Das Leben der Anderen (2006). This film lacks the complexity of the earlier title. The treatment of both the German Democratic Republic and of the later Art Academy rely on rather simple motifs.   I think the director’s craft suffered from a trip to the mainstream and a completely forgettable The Tourist (2010). However, this production is vastly superior to that and, in a year where the new releases  of real quality are sparse, stands out. It is in  colour, full widescreen and has English sub-titles;  definitely a movie to be seen in a cinema.