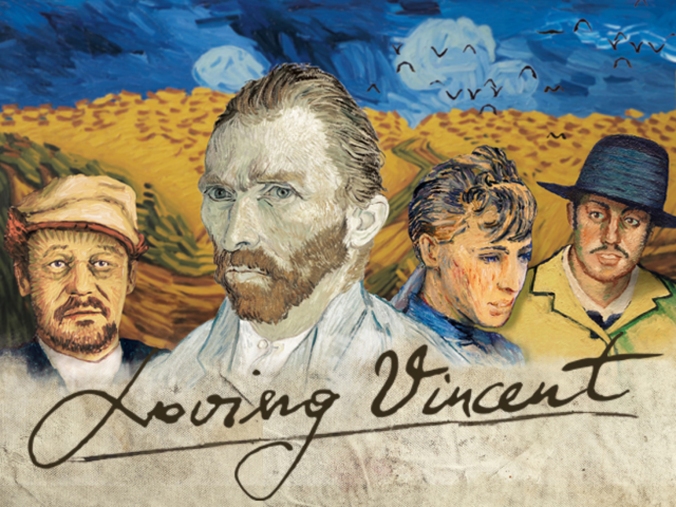 The last screening of this title was sold out, an uncommon feat at the cinema. It is the recipient of a number of Awards including Best Animated Feature Film Award at the 30th European Film Awards in Berlin. Comments have focused on the sheer visual beauty of the images.

This is an animated feature and it has used a set of distinctive techniques:

“Each of the film’s 65,000 frames is an oil painting on canvas, using the same technique as Van Gogh, created by a team of 115 painters.”

The film also uses live action sequences. These are mainly flashbacks within the narrative.

Van Gogh is one of the most prized [and expensive] painters in European Art and he has a presence in popular culture as well. His personal life and tragic demise have fed into this celebrity. The narrative in this production takes the form of an investigation. A young man, charged with delivering Van Gogh’s final letter, delves into the final days of the artist. Thus the film explores both the personal and the artistic.

The director is a Polish animator Dorota Kobiela with her first feature. Her co-director is Hugh Welchman, who normally works as producer,. The film relied on funding from the Polish Film Institute, an institution with a long and illustrious history.

The production was shot on a digital camera and is in colour and the academy ratio. [IMDB gives 1.33:1 but thus us usually masked to 1.37:1].  The film used a number of ac actors as ‘models’ for the paintings and they also appear in the ‘live action’ sequences. The British release has an English language soundtrack, dubbed by the credited actors and other voices. .

Van Gogh has enjoyed frequent representations on film. There is Lust for Life (USA 1956), directed by Vincente Minnelli with Kirk Douglas playing the artist. Some of the relationships in the film seem a little facile but the artist and his work are well presented. Then there is Vincent and Theo (France, Netherlands, UK, Germany, Italy) a film by Robert Altman with Tim Roth as Van Gogh. Roth makes excellent casting for the tortured artist. And there are several well made documentaries.