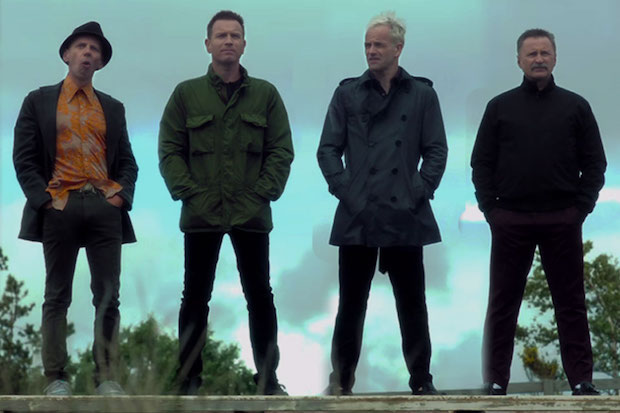 This is a sequel twenty years on from the popular and well received original.  I suspect that the pleasures of watching the film will depend on how much you liked the 1996 title: this is clearly an exercise in retro-pleasure, even nostalgia. The original cast are all there; Ewan McGregor as Renton; Robert Carlyle as Begbie; Ewan Bremner as Spud; John Lee Miller as Simon. Kelly MacDonald also returns as Diane, but only in a brief walk-on part. She does tell Renton that the new romantic/sexual character Veronika (Anjela Nedyalkova) is ‘too young for you’.

The film also returns with familiar settings and tropes from the original: including toilets and the great Scottish outdoors. The new film also has the same certification as the earlier title, 18. However, from memory, I would say that this has slightly less violence and drug-taking and a little more sex.

The film uses extracts from the 1996 film, more frequently than I thought was justified or necessary. But it also shows the characters’ lives before the plot of 1996 and we get to see on-screen the meaning of the title of both films. At the same time it brings the story up-to-date in terms of changed mores and social settings. Thus we have Veronika who is from Bulgaria. And the ending of the film moves on from  that of 1990s Edinburgh.

The production values, including the cinematography and editing are very well done. However the film is circulating in  a 2K DCP which I think does less justice to the visual than the 35mm of the original. But probably as Renton proposes, ‘choose  Trainspotting 2′.