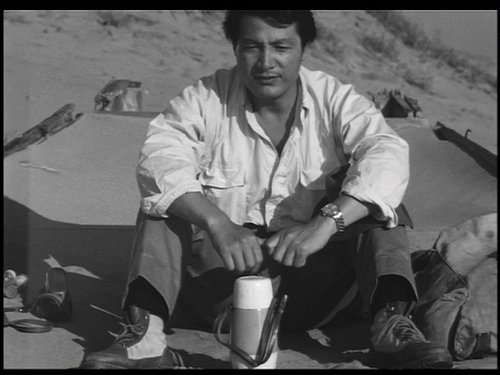 This is one of the classic films screening at the Leeds International Film festival and one of the few in the original format of 35mm. It is part of a retrospective ‘Soundtracks’ and the film has a minimalist and modernist electronic score by Japanese composer Takemitsu Toru. He was a regular collaborator with the film director Teshigahara Hiroshi and this is the latter’s most notable film. It won the Special Jury Prize at the Cannes International Film Festival and was nominated for an Academy Award in the Best Foreign-Language Film category.

It is an example of the modernist film-making found in the Japanese New Wave of the 1960s. It is a film of ambiguities but with a fascinating narrative and characters. An etymologist goes to the beach collect specimens for the day but events prevent his return to the city in the evening. The story develops in beautifully unexpected ways.  Visually the film is a tour de force, especially in the black and white deep focus cinematography of Segawa Hiroshi. The imagery at times is abstract and the music of Takemitsu adds to the unconventional feel of the film.

The film also has a strong set of social themes running through it. These receive extra emphasis from the opening and closing credits which offer an added dimension to the allegory. The film runs for just over two hours and exercises at time a hypnotic feel. Not to be missed on the big screen.