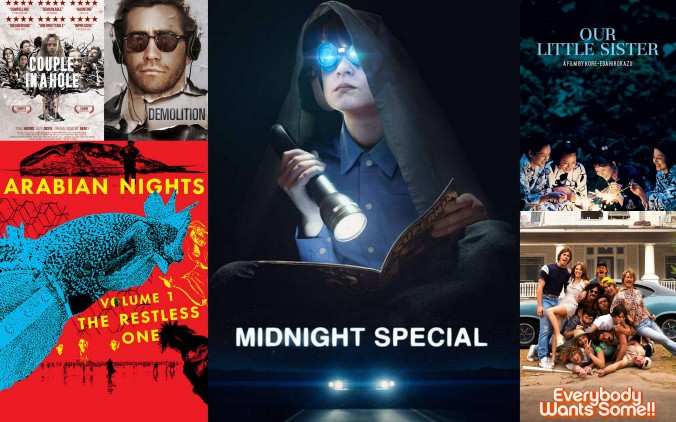 Some weeks are dominated by one big release and others offer a variety of films. In the next seven days there are ten different films at the Picture House including the latest from directors Jeff Nichols, Jean-Marc Vallée, Miguel Gomes and Richard Linklater.

First up is Jeff Nichols’ long anticipated Midnight Special (Fri 6:20pm with a Meetup and Wed 8:50pm, also 11am BYOB), a science fiction mystery from the director of Mud (2012) and Take Shelter (2010) with a Spielbergian feel, even if that’s not what Nichols was planning.

On Sunday afternoon there’s a rare chance to see all three of Miguel Gomes’ Arabian Nights films (1pm special ticket price: £15 full, £13 conc, £12 members plus another MeetUp). “A glowing love song to Portugal performed by a man who has mastered a range of exotic instruments” says David Jenkins in Little White Lies and a “passionately investigative, floridly imaginative triptych” according to Richard Brody of The New Yorker.

Jean-Marc Vallée has received a lot of attention in the last few years for directing Dallas Buyers Club (2013) and The Wild (2014) but it was C.R.A.Z.Y (2005) that makes him a director to keep an eye on. Unfortunately his latest film Demolition (showing daily) is getting mixed reviews but it’s an interesting premise and a great cast so may be worth checking out.

Another director who’s always worth paying attention to is Richard Linklater and on Monday there’s a preview of Everybody Wants Some!, a spiritual sequel to Dazed and Confused (1993) and already described as one of the best films of 2016. This is a special preview screening ahead of the film’s UK release and will be returning for a week from Friday 20th May.

The UK Green Film Festival continues with Population Boom (Sat 3:30pm), a captivating exploration of overpopulation and declining resources from the makers of Plastic Planet (2010).

There’s also a chance to catch up with two films from LIFF29: Our Little Sister (Sat 5:40pm & Wed 3:40pm) from the director of Like Father, Like Son (2013) and Couple In A Hole (Thu 6:20pm + meetup) – a “a ruralist cross between British psychological realism and the wilder, Artaud-inflected fringes of French art cinema” (Jonathan Romney, The Guardian).

If all of that wasn’t enough there are also two films taking a look at the making of films. The Creatures Of The Night showing of The American Dreamer (Sat 11pm) looks at Dennis Hopper’s drug fuelled making of the experimental film, The Last Movie (1971). On Tuesday at 6pm Notfilm (2015) explores the production of Samuel Beckett’s only screenplay for cinema, Film (1965), which stars Buster Keaton and will also be shown as part of the screening.