This Monday, 2nd November, exactly one hundred years ago, the Picture House opened for its second year of business. Already in the first twelve months of film entertainment it had successfully established itself. The log books, donated to the West Yorkshire Archive Service in 2015, record the box office takings. Weekly attendances were now regularly over 2,000. At a Bank Holiday they could exceed 3,000. And the same happened when there was a really popular film. So the log books record key titles, and show that Charlie Chaplin had already registered with his amazingly fast rise to fame and stardom. 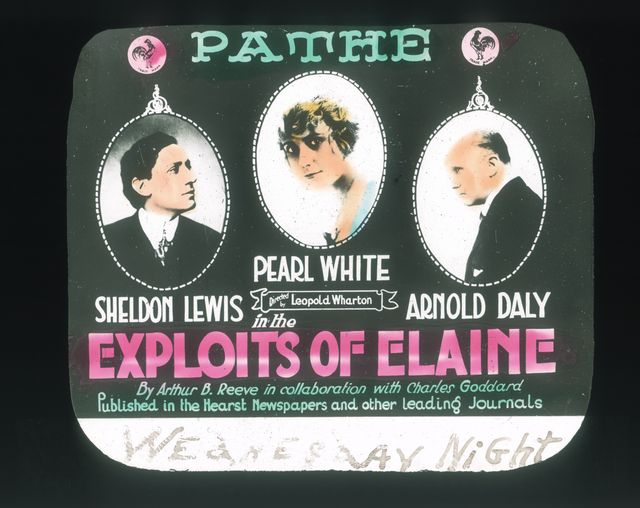 Serials were immensely popular in this period and were produced by a number of different film industries. The French were leading exponents, most famously with Fantômas (Gaumont, 1913). This was so popular that it ran through five episodes, each over an hour in length. And the characters returned later in sound versions. Like many of the serials the original property was a comic book. Fantômas was a master criminal, hunted through the episodes by Inspector Juve. The staples of this and other serials are criminals, detectives, sometimes spies, disguises, adventures, chases, mysterious events, and cliff-hanging endings.  Over a hundred were produced in the USA alone in the silent era, and a number of the key characters also re-appeared in later sound versions. There was a serial produced in Mexico, The Grey Automobiles (El Automóvil Gris, 1919): based on actual criminals and police corruption. The entire serial was screened at this year’s Il Giornate del Cinema Muto.

The Exploits of Elaine followed on from an earlier Pathé serial, The Perils of Pauline (1914) which enjoyed the billing –

The star, Pearl White, returned to star as Elaine. One description offers the ‘damsel in distress’ genre. However, this does not really do the films justice. Pauline, and then Elaine, are constantly in danger, usually from the cliff-hanging ending. And both heroines are assisted by an authoritative male who frequently rescues them. However, they perform many of the action and stunts  and are quite capable of confronting their adversaries: in Elaine’s case a mysterious villain known as ‘the clutching hand’. The stunts were often ‘real’ and involved the heroines in fights, explosions, train and aeroplane acrobatics, and exposure on cliffs and over torrents. Like many other serials Elaine’s adventures were taken from a book, a scientific mystery series. Elaine proved as popular as her predecessor Pauline and there were two subsequent serials. A sense of the plotlines can be gained from some of the Chapter Titles:

Again the French were also pioneers, Gaumont had Les Vampires (1915 – 16) with its black-clad heroine Musidora. The influence and popularity of these serials was widespread. Pauline was an influence on a famous and popular dare-do heroine in Hindi Cinema, ‘Fearless Nadia’. She wowed audiences from the 1930s to the 1950s and was the equal of her predecessors in taking on villains and coping adventurously with adversity.

Both Pauline and Elaine appeared in short episodes, usually one reel running for about fifteen minutes. Fans who attended the Centenary Night screening will have seen an episode of The Perils of Pauline, with a climatic ending in a quarry.

The popularity of this serial and other films demonstrates that in Leeds, as nationally, even at this period the burgeoning US industry was already developing the dominance which has lasted till the present day.