Rose Sawyer from Leeds University Union’s Medieval Society is one of the organisers of the Medieval Film Festival taking place this week. We invited her to tell us more about the festival and medieval studies in Leeds…

Did you know that Leeds is a major centre for Medieval Studies?

No really, despite the fact that during the medieval period, Leeds (or Leodis as it was called) was the sort of town that existed solely because there is only so much land you can have before you have to have something else; nowadays, Leeds attracts medievalists like honey attracts hand drawn bears. This is partly due to the Institute for Medieval Studies at the University (so good that Oxford copied it), but during the summer the main draw is the International Medieval Congress. The IMC is the second largest medieval conference in the world and Europe’s largest annual gathering in the humanities. Over two thousand medievalists converge on Leeds to give papers and cadge free wine, usually they huddle in the familiar confines of the University, but this year they might just be tempted outside of the academic bubble….

The LUU Medieval Society is working in association with the Hyde Park Picture House and the International Medieval Congress, as well as with Leeds for Life Foundation funding, to present six diverse and fascinating medieval films from around the world. The intention of the festival is to explore how the medieval world has been represented through the modern medium of film in the past century. Rather than point to anachronisms, the intention is to encourage discussion about these visual portrayals and how they influence the public perception of the Middle Ages. In particular, we want to emphasise the breadth and scope of international cinema and its ability to advance cross-cultural understanding.

In order to encourage and facilitate analysis of these topics, each film will be followed by a panel discussion, to which audience members will be encouraged to contribute either through questions or through their own responses to the films. The panels will be made up of people who have expertise in areas relating to the films.

In particular, we are delighted to welcome Professor Pamela Berger, who was the co-script writer and producer of Sorceress, our final film of the week (Thursday 9th 8:30pm, Leeds University Union). Also of note for film enthusiasts is the 35mm print of Alexander Nevsky that the Hyde Park Picture House has managed to source. In addition, if you have or are a child, there will be a workshop on medieval manuscripts running before our showing of The Secret of Kells.

All films being shown at the University of Leeds are free of charge to everybody. IMC delegates will also be admitted to the Hyde Park Picture House showings for free; the normal, excellent value, ticket prices apply to everyone else.

Please let your friends, family, colleagues and casual acquaintances know about the Leeds International Medieval Film Festival so that we can all enjoy celebrating the Middle Ages on the big screen! 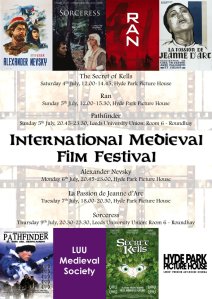