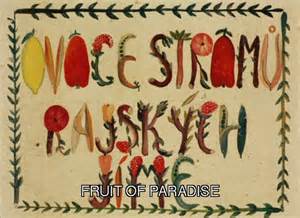 This avant-garde classic comes courtesy of the Czech National Film Archive and the Czech Centre in London where film buffs have enjoyed a major retrospective of the work of Vera Chytilová. She was one of the outstanding filmmakers in the Czech New Wave and, whilst she rejected the label of feminist, an important female director in times when they were even rarer than at the present.

The Czech New Wave was notable for its observational approach to cinema: an important influence on our own Ken Loach. And the filmmakers were also drawn to unconventional techniques and forbidden topics. The later led to regular attempts to ban or censor films, something that afflicted Fruit of Paradise. Following on from this film Chytilová became a ‘non-film person’ for six years.

But there has also always been a strong surrealist strand in Czech art and film. Since the 1930s Prague has been an important centre for this movement, tying in to a longer tradition of mannerism. Jan Švankmajer is certainly the most important surrealist filmmaker in the contemporary world.

It seems that Chytilová is better described as a Dadaist, the predecessors of the surrealist movement. Her most famous film, Daisies (Sedmikrásky, 1966) was screened at the Leeds International Film Festival in 2009. Daisies is a witty, non-stop impressively non-conformist satire on materialism [in the capitalist sense] and on the particular hang-ups of men. Only a few weeks ago the Picture House screened two of her early and impressive student films. All three are attractive trailers for what is her most imaginative work.

The title is variously translated to include either ‘Paradise’ or ‘Garden’. The former makes more sense because the wealth of illusions include quite a few with biblical resonances. Chytilová’s films play with gender as well as representation. So in this tale one protagonist is a serial killer: the dark centre of so much of modern cinema. As with her earlier films Chytilová offers impressive visual and musical tropes, which fill out the settings and symbolism.

The excellent Time Out concludes on this film with:

It is both of its times and outside the clock in its intent.