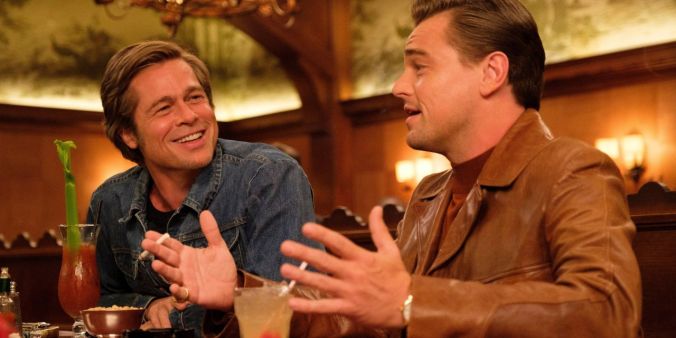 Leonardo DiCaprio and Brad Pitt are established stars of the Tarantino empire and have made another corker with his 9th film. Is it his 9th? You have to count Kill Bill volumes 1 and 2 as one long epic, and remember that even though the Hateful Eight felt like it was 19 hours long, it was still only the one film. The director has repeatedly said that he only ever planned to make 10, so the pressure’s building to go out with a bang.

It’s 1969, Charles Manson is on the loose, Roman Polanski’s still a welcome neighbour and the Hollywood bubble is thriving in Los Angeles. Leonardo DiCaprio plays Rick Dalton, an actor fading out of his 30s and his cinematic heyday, with Brad Pitt as his put-upon sidekick/stuntman/driver/dogsbody Cliff Booth.

Rick is known for a 50’s cowboy TV show and as the film starts the series has come to an end so Rick is on the hunt for his next job. His flavour of dashing leading man is no longer in vogue and increasingly typecast as the villain in one-off shows and movies, Rick looks to Europe and the booming spaghetti western scene. Cliff’s career follows Rick’s, albeit in a less fortunate way. Cliff does as he’s told, travels in economy class and patiently tags along, accompanied by his faithful hound Brandy. Cliff and Brandy live in an out-of-the-way trailer, which is a far cry from Rick’s gated community mansion in the Hollywood hills where Roman Polanski and Sharon Tate are new neighbours Rick hopes to befriend to help boost his fading stardom.

There are snippets of life on set and their past filmmaking experiences, including an on-set brawl between Cliff and Bruce Lee and Rick’s encounter with a wise-before-her-time child star. We’re given some wonderful flashbacks to films he’s auditioned for and starred in, including an alternative version of a 60’s classic and one where he tackles Nazis with a flame-thrower. Like the Machete trailer in the Grindhouse double-feature, part of me hopes that we could one day see the rest of the film, although I’m afraid Tarantino might just have shown us the ending.

Once Upon A Time… skips between the big story and the small and inconsequential in a familiar way if you’ve seen any of Tarantino’s previous 8 films. Rick and Cliff chew the fat when they’re driving in a way that has a very similar feel to the ‘royale with cheese’ conversation in Pulp Fiction and the bursts of violence at the ranch and in the climactic scenes yell Tarantino’s name. He clearly isn’t squeamish about subjecting younger, female characters to the same kind of nastiness we’ve more often seen his leading men dole out to each other. He might not be squeamish about it, but I found the dynamic of those fight scenes quite difficult to watch.

If you don’t know what happened when the Manson family met Sharon Tate, you can probably ignore the departure from reality, but I’m torn about it being an alternative history when the real things that happened were so terrible. Injecting new characters on the edges of a real-life story is one thing, but then changing how that story plays out made me uneasy. I’ve read that it could be seen as a way of paying homage to Tate, a way of wishing away the truth, but I can’t help but wonder if that’s a bit of a self-indulgent fantasy on Tarantino’s part.

Misgivings aside, I enjoyed the Once Upon A Time… In Hollywood. It’s long, but checking back I’m surprised it’s as long as 160 minutes. Hollywood glamour on the cusp of the 70s, the flash cars and constant sunshine set the backdrop for an immersive ride. If it’s really to be Tarantino’s penultimate film, it lives up to his catalogue so far and sets an exciting tone for a blow-out number 10.