Some fortunate Friends enjoyed this film at the beginning of December, courtesy of Curzon Artificial Eye and ‘The Guardian’. It would not surprise me if some of these returned to see again one of the outstanding movies released this year. It is a long title, running 185 minutes. Moreover, it has a challenging narrative which covers the periods from the end of the 1970s until the present. The different periods are presented in a series of flashbacks which are organised, not chronologically, but thematically.  And in the different periods the main protagonists move round Chinese urban areas.

This is a family melodrama centred on the couple, Liu Yaojun (Wang Jingchun) and Wang Liyun (Yong Mei). They have two sons in the story, one adopted but both called Xingxing. Li Haiyan (Al Liya) is a friend of Wang Liyun and an official at a factory where they work. Also at the factory Shen Moli  (Qi Xi) is at first a trainee alongside Liu Yaojun. The latter two women also have sons who are important in the story. These adults age and change their appearance as the pilot develops. Whilst the offsprings appear at different ages played by different actors.  Having noted this the story does gradually fall into place and in the latter stages a viewer can discern the tragic relationships that befall this couple.

One aspect of the tragedy is the ‘one-child’ policy that operated for a long period in China. However, it is the relationships between characters, both in the factory workplace and in the residential blocks and housing, that is most important. Both aspects are afflicted by silences. This is disrupted at the factory when the workers angrily confront the mangers [‘bosses’] as they unveil the new economic [capitalist] policies. And in the family relationships it is the final breaking of another silence that brings some relief to the protagonists.

The director, Wang Xiaoshua, has sixteen previous credits not all of which have been released in Britain. One film that was released, Shanghai Dreams / Qing hong (2005) shared one aspect of the plot in this later release: the policy in the 1970s and 1980s of moving large numbers of workers to new industrial zones. But in this feature the protagonists move from employed workers to self-employed. Another comment on the changing economic  world in China.

I have not found a translation for the original Chinese title, but the director sees this as the first in a trilogy of ‘Homeland’ movies. And he talks of charting the effects of the ‘shattering’ changes in the last three decades in China.

The feature has fine production values. There is excellent cinematography and sound; whilst the editing carefully knits the disparate periods and setting into a dramatic tapestry. It is in colour and standard widescreen with the Mandarin dialogue translated in English sub-titles. Chinese films have been a prominent part of quality cinema this year. Earlier titles like An Elephant Sitting Still / Da xiang xi di er zuo and Ash is the Purest White / Jiang hu er nü offered visual and aural pleasure with complex but fascinating stories. This title offers the same pleasures and three hours is not too long to savour these. 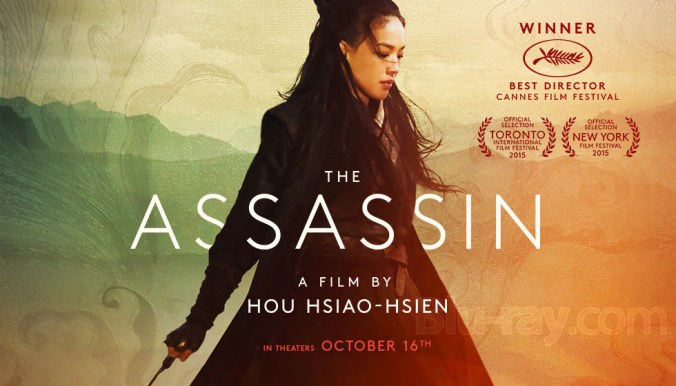 This film was screened several times in the Official Section at Leeds International Film Festival. The director, Hou Hsiao-hsien won the Best Director Award at the 2015 Cannes Film Festival. This is a stunningly beautiful film. However, many people have remarked that the presentation of the plot is opaque.

The UK marketing uses the martial arts genre in the publicity, which is a mistake. This is a slow, artful film: it has parallels in terms of plot with Hero (Ying xiong 2002). Moreover, for a western audience, I think it takes some time to identify the separate characters, especially when for much of the time they wear the formal clothing of the period. In addition the film moves around in different time periods, but without the usual signalling of flashbacks.

Rather than describe the plot, the main point of which is relatively simple, it may help to describe those I believe to be the main characters:

Shu Qi as Nie Yinniang, the eponymous assassin, dressed in black when we meet her.

We meet Jiaxin along with Nie Yinniang in the opening sequence. Jiacheng only appears in flashback,

Zhou Yun as Lady Tian, Tian Ji’an’s wife. (Belongs to family of a separate Provincial ruler.) It seems that she is also a masked figure who duels with Nie Yinniang.

Satoshi Tsumabuki as the mirror polisher. Unidentified by name, the character’s title action is easy to miss: he appears late in the film when there is an attack in woods and he comes to the rescue. It seems that he has more scenes in the Japanese release version.

And there is an older whiskered character who I believe is Jacques Picoux as Lady Tian’s teacher: he appears twice sitting in his study.

Note it opens in black and white and then changes to colour. And whilst the bulk of the film is in Academy ratio [1.37:1], there are two sequences (of only two shots each) in widescreen ratio [1.85:1] . For more …