Unfortunately we have to share some sad news, Peter Chandley, the Chair of the Friends of the Hyde Park Picture House and a regular at the cinema, passed away late last year. 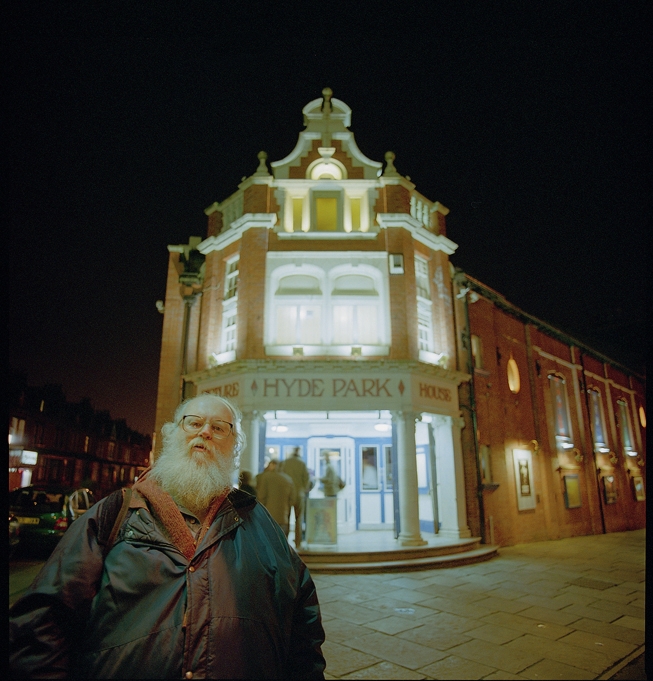 We are thankful to his cousin, Margaret Francis, for sharing some stories about Peter with us which we have brought together here alongside some thoughts from the Friends of Hyde Park Committee.

Peter was born on July 20th, 1953 and was adopted a month later by Marjorie (Lawrence) and Herbert Chandley. Marjorie owned a small haberdashery shop that also sold children’s clothes before her marriage and Herbert served in the war. He late became a teacher who taught woodworking. Marjorie and Bert lived in a bungalow in Windsor, then moved to a house in Frinton on-sea when Peter came into their lives and they cherished him dearly.

Peter attended Children’s Special Service Mission (CSSM) on the beach every morning during the school summer holidays. This helped build a strong bond with his faith which was important to him throughout his life.

After school Peter went on to attend teachers college and it was this that brought him to Leeds. When his training finished, he came to settle in the city, living around the Armley area for much of his adult life.

We’re not sure when Peter first visited the Picture House but he worked for a time in the Hyde Park Area as a teacher at the Royal Park Primary school on Queens Road. There he touched the lives of many young families in the area and built a relationship with our community which would extend to his active involvement in the Friends of Hyde Park Picture House from its establishment in 1984.

Peter loved trains, especially steam trains and he sought out and enjoyed rising as many as he could in the UK. He also loved horror films, science fiction and fantasy and comic books. He was an avid collector of the latter and enjoyed many of the recent comic book adaptations.

This might seem a contrast to his lifelong commitment to the Church but these lovely dichotomies are one of the wonderful things to remember about Peter who was actively involved in the Christ Church, Upper Armley, in his adult life. It is perhaps this community which will remember him most fondly alongside our own.

Peter was Chair of the Friends since 2008 and was a valuable voice in the group. Always positive, kind and thoughtful, Peter carried with him so much of the cinema’s story. Not just the tale of our bricks and mortar but the people who had been so key to it over the years and the story of the Friends itself which is the story of the saving of the cinema. He was also a keen supporter of other local cinemas, The Hebden Bridge Picture House, the Rex at Elland. By bus and train he would traverse Yorkshire looking for the right film at the right time. Always a cheerful hello and a friendly smile, it’s impossible to know how many people he came to know in these travels.

We are sad beyond words to think of the stories which are lost with Peter’s passing. In the telling of the story of the Picture House he is a chapter we are lucky to be able to cherish.

“So why do we spend all the time we do on the Hyde Park, this one little Cinema. Well because we care about it in the world of multiplexes but we can’t afford to be complacent as I used to go to the Lyric cinema for many years but it closed and few remember it today. We know the Hyde Park is a very special place which provides a unique venue for watching the films from the oldest silent show, the foreign and all the other unusual films which don’t get shown very much anywhere else, to the special shows as well as all the other films. We have something to be very proud of and where would we go to if it wasn’t there.”